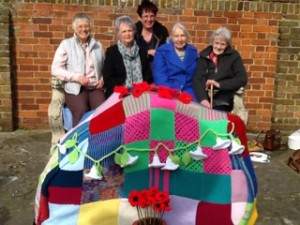 Whilst Cookham might not yet have played host to Banksy’s artwork by stealth, a new and slightly more unusual form of graffiti is about to hit the village.

When the ladies of the Cookham knit and natter group were asked to provide an exhibition piece for the 2015 Festival, they came up with a very different way to show off their skills.

‘Yarn graffiti’ or ‘yarn bombing’ has taken off in a big way in the US. It started in 2005 when Texas knitters tried to find creative ways to use up their left over wool The art form can be seen in major cities across Europe and the US and now, it’s coming to Cookham!!

As the Festival opens in Cookham on 2nd May, visitors and residents will see a familiar landmark – a hallmark of the Cookham landscape – covered in a large blanket, surrounded by a colourful display of potted plants, created using knitting and crochet work.

Sue Madelin of the Cookham ‘knit and natter’ group says ‘this is the first time any of us have attempted yarn graffiti. We enjoyed knitting something completely different and we hope that people will be amused to see knitting used in a way that’s a bit out of the ordinary. The great thing about ‘yarn graffiti or yarn bombing’ is that it’s not permanent, unlike many other forms of graffiti, although the yarn version isn’t weather proof either. But as Sue says, “we shall leave it in place throughout the Festival, come rain or shine, and hope it raises a smile whatever the weather! And if any of it still in a fit state at the end, we shall donate it to charity.

The Cookham ‘knit and natter’ group meet on Monday afternoons at Cookham library.  No particular skill level is required. “we bring along our individual projects and have a chat and a cup of tea and learn from each other.  We also often join forces to make blankets for charities and hospitals and, last year, we contributed to the knitted bunting for the start of the Tour de France in Yorkshire.

The Cookham Festival will take place between 2nd and 17th May when keen eyed visitors and residents will spot the transformed landmark.

The Old Windsor Knit and Natter group have produced an allotment which is on display at Cookham Costa throughout the festival.