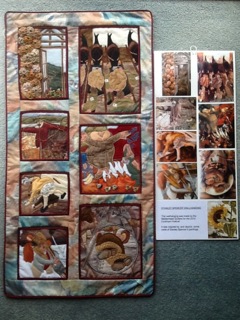 Ruth Daniel and five of her fellow Maidenhead Quilters have designed and sewn a beautiful wall hanging based on a collage of works by Stanley Spencer.  It will feature in a talk  to be given during the Festival.

When we think of quilting, perhaps the first thing that springs to mind is a patchwork bed covering.  However, as Maidenhead Quilters have demonstrated, there’s much more to it.

Quilting has been practised for centuries with origins in the Middle East and Asia, and later in Colonial America where the gift of a quilt indicated friendship and neighbourliness.

Recently it has enjoyed a revival here in the UK. Ruth says, “the advent of electronic sewing machines, and the wide range of fabrics now available, mean that this traditional art is producing practical and decorative pieces in modern and contemporary styles”.

When the group was approached by the Festival Organisers to produce a work for the Festival, they decided the work of local artist Stanley Spencer would be a fitting theme. Ruth researched Spencer’s paintings and made a photographical collage from which the team worked.  “After selecting the works to be featured and designing the quilt, it took us about a year to complete.  Working as a group always takes a bit longer but the result is very pleasing and the process is great fun!”.  To complete the work the team used a machine appliqué technique that provides much greater accuracy and definition.

Ruth, needlewoman and ecclesiastical embroiderer, now retired, has lived in Cookham for the past 25 years. She says “We came across Cookham while returning from a house-hunting trip to London.  When we drove up the High Street we knew this is where we wanted to be!”. She and her fellow quilters are very much looking forward to taking part in the Festival for the second time.

They will give a talk: “A Quilter’s View of Cookham” on 13th and 14th May at 3.30pm at the John Lewis Partnership Heritage Centre.

Ruth hopes that after the talks the quilt will find a permanent home, “We would like to think it will be enjoyed by the village and its visitors for years to come”.