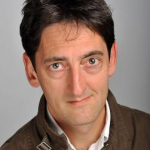 “I love challenging people to try something new – that’s when I believe we can discover things about ourselves that we might never have considered before,” says Richard James, professional actor and playwright. It’s that ethos that inspired him to start The People’s Shakespeare.

“In 2010, I was approached by Mike Copland, who was then chairman of the Cookham Festival, and asked if there was anything I could contribute to the Festival. I suggested staging a Shakespeare production utilising the people of Cookham.”

Richard’s no stranger to the stage himself. His career has taken him some strange places – including being an alien police officer in Space Precinct, a weasel in Wind in the Willows, and even the Nicorette Cigarette – and seen him in roles opposite Helena Bonham Carter, Julia Walters and Burt Reynolds, and he has been a regular in children’s television with shows including M.I. High, My Parents are Aliens and The Mysti Show to his name. He has also written over thirty plays, which are performed in countries as far-flung as Canada and New Zealand.

Joining this with his passion for community theatre, The People’s Shakespeare has been a resounding success with Cookham residents. “The hope was to attract those who wouldn’t normally be interested in either performing or Shakespeare; since we started, we’ve staged ‘A Midsummer Night’s Dream’ and ‘Richard III’ (just as his body was found in a Leicester car park!), while this year sees us transforming Pinder Hall into an Elizabethan street for ‘The Merry Wives of Windsor’. It’s been so rewarding to see people develop new skills or find a confidence they never knew they had.”

Richard is a long-time supporter of Cookham and the Cookham Festival, having been a participant and audience member since he moved to the village twenty years ago.

“Cookham is just so beautiful. I love walking up and around Winter Hill and Cookham Dean or down to the lock – perhaps popping into a coffee shop or two along the way. I believe Cookham is a special place. If you have an idea, the people of the village will make it happen and support it; one need look no further than the Cookham Festival for evidence of that.”