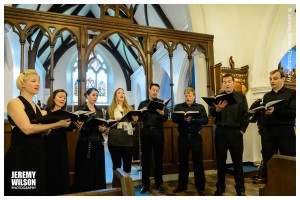 The Rose Ensemble treated a sell-out audience in St John the Baptist Church, to a brilliant choral concert on Saturday afternoon. The group of eight singers, brought together for the Cookham Festival by husband and wife team of Julia and Ed Millard, had been singing colleagues in the larger National Youth Chamber Choir, when they won the prestigious Tolosa International Choral Competition held in Tolosa, Spain, some 20 years ago.

Coming together only occasionally the eight singers effortlessly demonstrated an infectious enthusiasm for a range of music that took the audience through from early 15th French music to the latter part of the 20th Century. Starting with the Gerald Finzi “My Spirit Sang All Day” they moved through 16th century madrigals, including the beautiful Silver Swan by Gibbons to a machine gun rapid “iI est bel et bon”.

With the choral talent that they had to hand they performed an exquisite “Blue Bird” by Stanford and completed the first half with two glorious pieces from the Ralph Vaughan Williams, Shakespeare songs: “The Cloud Capp’d Towers”, with words from The Tempest and a stunningly precise “Over Hill, Over Dale”, with words from A Midsummer Night’s Dream.

The second half started with Swingle arrangements, which allowed the group to show their full choral capabilities. A beautifully smooth “L’amour de moi” featured Julia Millard as soloist and was then contrasted with excellently executed Bach organ fugue for which Swingle is so famous. Moving on then to Kings Singers numbers they performed “You are the New Day” and “And So it Goes” with Ed Millard as soloist.

Rutter then got in on the act, as they performed his arrangement of Sourwood Mountain and which included some remarkably accurate whistling from the sopranos. This was followed by a mesmeric Shenandoah, with soloist Rachael Lloyd and the concert was concluded with Cole Porter’s “I’ve got you under my Skin” and Louise Marshall’s haunting arrangement of Paul Simon’s “Bridge Over Troubled Water”.

The encore was a staggeringly complex, yet effective piece about Mexican food and the importance of spices. The Rose Ensemble didn’t need the spices they were red hot!