The Women of Britain do their Bit

We were lucky to have one of the country’s experts to add to the Festival’s programme of World War 1 events.  Edward Dixon, who lives in Pinkneys Green, treated his audience at the Methodist Church to a fascinating insight into the impact of the Great War on the role and status of women in Britain. In 1914, a woman’s role was very clearly determined by her class.  The wealthy young woman was expected to gain an education, attend a finishing school, get married and produce a male heir; a middle class girl would get a secretarial job; and a ‘lower class’ girl would go into service or, in some parts of the country, work in one of the mills.  By 1918 that had all changed. Women had become involved in, and in some case taken over, large swatches of activity across the country – on the farms, in the factories, working on the buses and trains and in many areas of public service. And, of course, many girls and women from across society became nurses, serving at home or in the many hospitals in the battle zones.  It was to lead to the extension of the franchise and the acceptance that women in the future would play an increasingly equal role to men.  The world would never be the same.

Edward illustrated his talk with some fascinating images from the time as well as anecdotes which brought his subject to life.  And the good people of the Methodist Church provided an excellent tea! 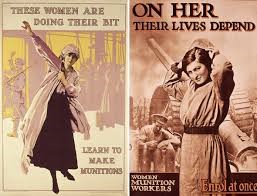