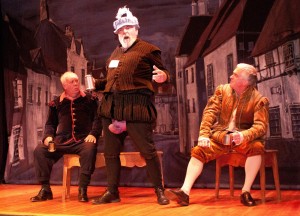 Shakespeare came alive last week in Pinder Hall with the Peoples Shakespeare transporting us to the Tudor world of intrigue, humour, drama and crisscrossing plots.

Under the brilliant direction of Richard James the people of Cookham donned their costumes and convincingly became the characters in this play.  The use of space and the clear drawing out of the plots added another dimension to the plot Shakespeare wrote.  The gruff Falstaff never learns and repeatedly gets his comeuppance at the scheming hands of the merry wives.  Interwoven into the story telling is the plotting to find a husband for Anne Page who despite her parent’s efforts, eventually finds her own love.  Further intrigue comes on the scene with the deception of the fictitious ‘honest’ Germans misleading the Host into thinking they were buying his horses.  To single out particular performances could be cruel to those not mentioned because everyone gave a fantastic performance, but one must recognise the gigantic task undertaken by Derek Bond; having to learn so many lines and also continuously engaged with the part – he was Falstaff. 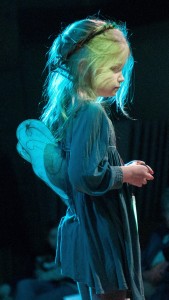 Richard pulled it off again for another year – well done Peoples Shakespeare.