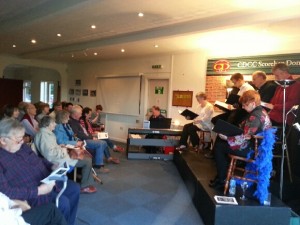 A packed cricket club was treated to a sublime evening of entertainment, provided by a team of local artists who supplied poetry and music, laughter and tears and left all who had the luck to be there with abiding memories of the Great War, as reflected in its poetry and popular music.

The show was devised and written by Roger Deats and presented by Roger, Ben Saunders, Huw Rowley, Judy Deats, Sue Roberts and Jeremy Rowe. The performance began with the evening sunshine flooding into the cricket club, appropriately reflecting the optimism and jingoism of 1914. As the sun set and darkness fell, so the poetry darkened, as the stark truth of the horrors of war struck home. Poets such as Siegfried Sassoon and Wilfred Owen and the poet and composer Ivor Gurney reflected just this growing bleak realism in their works over the course of the war.

Interspersed between readings from the war poets were popular songs from the music hall and the trenches, highlighting the poignancy of the poems and providing a voice for the common man.

Cookham Dean Cricket Club was a particularly appropriate venue for “Voices of the Great War”. The view from the patio doors, beyond the cricket pitch, can hardly have changed over the past 100 years, nor can the values and camaraderie reflected in the club itself. Club chairman, Ian Davis, in a brief message of welcome, reminded the audience that one of the poets whose work was included in the programme was Julian Grenfell, the son of Lord Desborough. After Julian’s death in the war, his father introduced a cricket competition in his memory, which is now the oldest one day cricket competition in the world. Cookham Dean and their Under 13s would be playing their respective opening rounds of this year’s “Julian Cup” competition in two days’ time.

Tuesday’s audience greeted “Voices of the Great War” with prolonged and sustained applause and the show in its present format  must surely have an appeal reaching far beyond the Festival. It is to be hoped that Roger Deats and his cast will find other opportunities to perform it, resisting the temptation to change or “improve” it.