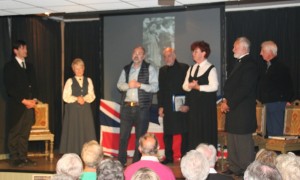 This dramatised reading was a brilliant cauldron of vignettes depicting life during the Great War; giving swirling glimpses of life at the front and of the specific impact it had on the village life of the Cookham’s.  We were reminded not only of the horror of the front but also of the dreaded knock on the door (being given the sad news of a lost loved one).  We also saw that life went on: we peeped into the social conditions endured (sixteen living in one small cottage); we heard about the philanthropy of a few; the scandal in the town hall; an alleged local affair; but most strongly for me was the grit and resilience of people to manage through adversity.   The account was skilfully constructed by Andy Draper (who researched the material in the archives of the Maidenhead Advertiser and from friends in the village) and was so sensitively acted; convincingly taking us back in time and giving new life to those names on the war memorials.  The actors brilliantly performed their roles and I keep remembering Jenny Evans (cheekily playing the adulteress), Ted Harris (so emotionally and sensitively recounting those who died), Peter Hughes (as a vicar – look our Fr Nick) Richard James (defending the councils decisions) and Ros Joynes (reciting the rhyming verses), each of them living the characters they depicted.  The performance needs to be repeated so that future generations may also catch glimpses of war time Cookham.  Fantastically well done.

So many people have commented about the performance. Here are some of them: ‘Best thing I have seen at the festival’ – ‘One moment I had a lump in my throat and the next I was laughing – it got the balance just right between comedy and tragedy’ – ‘the whole event had a real impact on the audience and did everyone proud’ – ‘so interesting and thought provoking’ -