The workshops proved a great success, with everyone having a fun creative time. The variety of work produced was amazing and all to a high standard. Overall it was a fantastic weekend of creativity with many people leaving with a sense of achievement and some very tired tutors! 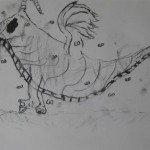 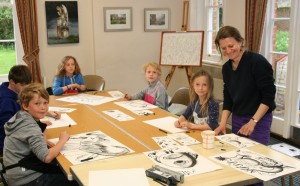 This workshop gave children the freedom to use charcoal on a large scale and to invent a creature from their imagination. Sarah encouraged the children to utilise the charcoal to its full extent and taught them how to improve the creatures by making them look more three-dimensional with different charcoal techniques. The beasts were really were fabulous! 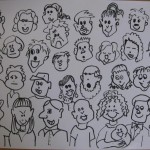 Sarah encouraged the children to invent their characters with the help of a ‘wheel of features’. They learnt how to draw bodies and spent the session creating a crowd scene with some hilarious results.

In spite of the frenetic activity of the other workshops going on in the room next door, our space turned into a beautifully quiet and relaxed zone suitable for the zentangle workshops. People who attended,  having been taught how to master the basic patterns and how to adapt them, found themselves  being absorbed into their creativity to such an extent that we worked in total silence! The end results were not just beautiful individual intricate patterns on cards but people left with a sense of total calm. 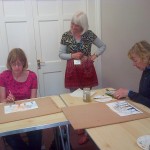 Those who took part were generally surprised by what they achieved in such a short time. There was some apprehension as it is a medium which has a reputation for being difficult, but the workshops were deliberately designed to require little or no drawing and relied on the quality of colours, the paper, and the brushes so students could all experience the magic of water colour. 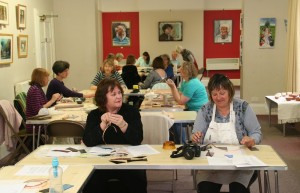 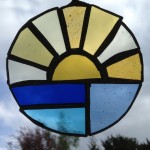 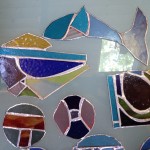 We had a busy and colourful time selecting glass and designing light catchers with just enough time to learn about glass cutting, soldering and copper tape. Everyone produced lovely pieces and I think the glass bug bit more than a few people.

Pots drying waiting to go in the kiln 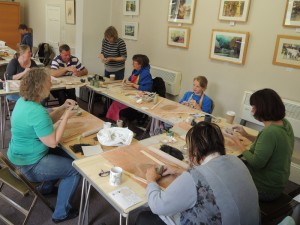 The sessions began with cylindrical slab pots, wielding their rolling pins there many were comparisons with pastry. After a flat slab was achieved the template was cut out and the texture applied to the clay. Everyone produced a beautiful pot, the most difficult part seemed to be which colour to have it glazed. Pinch pots and animals followed with the most common comment being “It’s not as easy as it looks” but some fantastic pots and animals have been produced. 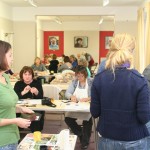