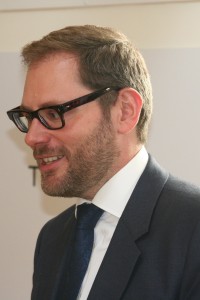 Gavin Henderson, Partnership Archivist at the John Lewis Partnership Heritage Centre, on Grove Island  explained to an enthralled audience the history of the textile archive, which is now housed in the Heritage Centre. The collection’ origins were in the Stead McAlpin print works in Cummersdale near Carlisle in the early19th century. Printing methods included the revolutionary multi cylinder printing as well as the tried and tested block printing technique. Gavin highlighted one piece of special interest in the collection, which is the Tree of life, by the renowned American designer, Harry Wearne, which used about 390 blocks to print the repeating pattern. In 1965 John Lewis purchased the factory in order to secure its supplies of printed materials as imported printed cloth began to take market share. In the 1950s and 60s screen printing was introduced to be followed later by  rotary screen printing. The factory was sold in 2007 and continues operating to this day. However, the Partnership retained ownership of the textile designs for commercial as well as heritage reasons and these now comprise the majority of the archive. The collection is now a valuable resource for research and product development.